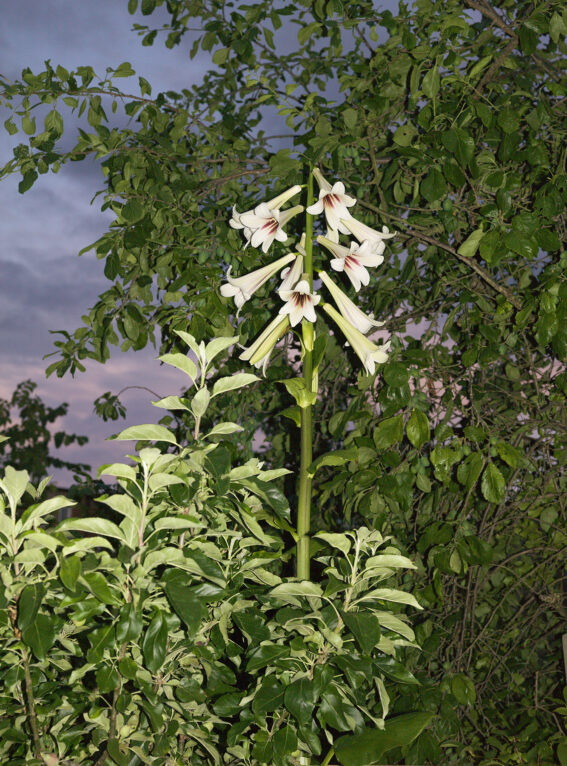 A new commissioned work entitled ‘Night Garden’ was shown as part of Florilegium – a gathering of flowers’ at Inverleith House.

Florilegium was curated by Emma Nicholson and is the inaugural biennial exhibition marking the re-opening of Inverleith House at the Royal Botanical Gardens, Edinburgh. It marks Inverleith House’s new status as a ‘Climate House’, a unique space to critically explore our complex relationship with the natural world

‘New and existing works by contemporary artists Lee Mingwei, Annalee Davis, Wendy McMurdo and Lyndsay Mann join over 40 established botanical artists such as Mieko Ishikawa, Dianne Sutherland and Sansanee Deekranjang in Florilegium: A gathering of flowers, at Inverleith House, Edinburgh, which re-opens this Autumn. The biennial exhibition is the first of a new programme as Inverleith House begins its transformation into Climate House following the award of the Outset Contemporary Art Fund’s Transformative Grant.

The artists will respond to Royal Botanic Garden Edinburgh’s (RBGE) globally-important plant collection comprising over 13,500 species with works that reveal how flowers can elicit cultural, historic, geographic, socio-political and scientific ideas. The title derives from the name for a group of botanical artworks and is part of RBGE’s ambitious project to catalogue the plant collection through botanical and contemporary art responses.  The artists – living and working internationally – have overcome the challenges of a global pandemic this year to create new and never seen before works of art for Florilegium. They will be displayed for the first time in this major exhibition marking the post-Covid19 reopening of Inverleith House.

Running from 16th October until 13 December 2020, Florilegium: A gathering of flowers will feature works showing plants that can be seen growing in the Royal Botanic Garden Edinburgh Glasshouses, and others of significant scientific value. Joining these botanical artworks will be a series of new and existing works from Annalee Davis, Wendy McMurdo, Lee Mingwei and Lyndsay Mann. Work draws upon ideas of death, renewal, ritual and colonial history and span photography, moving image and works on paper.

Barbadian artist Annalee Davis’s suite of drawings As If The Entanglements Of Our Lives Did Not Matter includes two family portraits that reference her mixed Caribbean heritage. Alongside the family portraits are six drawings on ledger pages, grounding these images in the history of the plantation system. Davis’s works feature plants such as Vervain, Bread and Cheese, Common Sow Thistle, Lady Palm, Paw-Paw, Sugar Cane, and Wonder-of-the-World.

Created during lockdown, Scottish artist and photographer Wendy McMurdo’s new series of images Night Garden was inspired by the flowers growing in the garden beyond her studio. Watching the cycle of germination, growth and renewal from her studio window seemed in direct opposition to her world inside and online. Wendy’s mother died in early May, and at the outset of lockdown and in the weeks that followed her death, she spent her time documenting this growth cycle which seemed more urgent than ever before.

Taiwanese-American artist Lee Mingwei shares two works: 100 Days with Lily, from a quarter of a century ago; and a work created during the current pandemic, Invitation for Dawn.  100 Days with Lily (1995) is a photographic portrait of a project in which Lee cultivated and raised a single lily from seed to death. In response to grieving his grandmother’s death, Lee spent every moment with this flower until it too died, documenting his own activities as the flower moved through its natural life cycle.

Finally, Lyndsay Mann’s cinematic essay A Desire For Organic Order is an immersive study of the Herbarium and the Centre for Middle Eastern Plants at the Royal Botanic Garden Edinburgh. Made in 2016, this intimate and epic work weaves together testimonies, journal entries, diaries and letters of diverse voices, tracing archive materials to contemporary links between Scotland and the Middle East.’